By Andrew Mulenga
Livingstone is well known for its most popular natural wonder, the Victoria Falls, but last Saturday the town’s main street came to a standstill as a manmade-wonder, the massive wire and steel rod sculpture of an Elephant was hauled through during the commemoration of the World Lion’s Day that was subsequently trailed by the World Elephant Day on Monday.

﻿ Nick named Green Elly; the jumbo was without doubt the star of the World Lion’s Day parade which according to the event organiser Sandy Simpson of Green Rural African Development (GRAD) won the inaugural World Lion’s Day award that is granted to the best of such events in the world.

Although Green Elly was in the procession, her allegiance stretches far beyond commemorating wildlife days. Green Elly is here first and foremost to eat, because she is hungry, very hungry but unlike other elephants she does not eat leaves, fruit and grass, she feeds on plastic, anything plastic but particularly plastic bags and bottles.

She was built by artists of the Kachere Art Studios, as part of their Funta-Funta Art Project – loosely translated as "crazy art” ­­– at their Think Green Laboratory in Livingstone and she is a prop for their worldwide environmental education activities and exhibitions who’s main objective is to create a green generation by encouraging conservation, tree planting, environmental awareness and recycling.

Green Elly is currently positioned on the Civic Centre lawns near the Livingstone Museum, on a space generously provided by the Livingstone City Council where like her distant cousins the Rhino near Long Acres Roundabout in Lusaka and the Nyami Nyami in Siavonga also built by Kachere, she will be stuffed with plastic waste generated before, during and after the forthcoming UNWTO general assembly, an exercise Kachere hopes will help to educate the community on the dangers plastic poses to the environment, besides promoting tourism once completed.

﻿﻿
It is also visualized that through “Donate your plastic litter to feed the Green Elly” campaign – as it is being called – visitors to Livingstone and the Victoria Falls which include schools, the community and tourists “will claim ownership through participation and consequently inspire ourselves to think clean green beyond the UNWTO – other than it becoming a tourist attraction only.”


Kachere as an arts outfit is ran in the pseudo-traditional village concept and has a Mfumu (chief) and Ndunas (village elders or wise men) and according to the Mfumu, Alexis Phiri, the team has been collecting litter from the airport, hotels, restaurants, townships, Victoria Falls and the city dumpsite known as Marabo – a colloquial play on the word “rubbish”.


The Mfumu also claims that the team has litter collected from former US presidents Bill Clinton and George Bush Jr’s recent entourages to Zambia waiting to go into the belly of Green Elly. There is also “donations” of litter from Grant Cumings, whose family runs two properties, Chiawa and Old Mondoro, in Zambia's Lower Zambezi National Park. Cumings will provide a truck load of plastics donated by the various camps in the region. And on Thursday, Green Enviro-watch donated litter from their on-going workshop that goes under the theme “promoting environmental tourism”.


Kachere is currently in talks with the National Heritage Conservation Commission’s South West Region management for permission to place bins made from soft steel and wire at the entrance to the falls.


It appears with every new project, Kachere’s passion towards conservation increases and the hope to do something bigger. Besides the Rhino and the Nyami Nyami – which is still a work in progress – the team was part of the COP17 African Caravan of Hope in 2011 along with other ecological activists and were very militant during the Durban Conference trying to breakdown the conference jargon into simpler terms that the average person on the street can understand.


What's more, the last seven years have been a journey of educating everyday Zambians on climate change so much that one can safely say they are the country’s most aggressive art collective when it comes to environmental awareness with their Funta-Funta brand of art.


Last year alone, they conducted a three day environmental entrepreneurship and arts training workshop in collaboration with the German Development Cooperation (GIZ) for women and children at the Naluyanda Integrated Development Organization (NIDO) as well as environmental awareness lessons with children from the infamously menacing Chibolya shanty compound in Lusaka.


During last year’s Christmas season; working with homeless children they descended on a dumpsite at Lusaka’s Kamwala market where they turned trash into decorations to adorn a tree that is normally used as a urinal. During such sessions the team calls on passers-by and preaching the ecological gospel, as should be expected at Livingstone’s Green Elly for the next few weeks, if not months.

﻿
Key among the preachers is long-time climate change crusader and wastepaper artist
Almakio Banda, a former Kabulonga Girls teacher who is currently applying his art teaching skills to a different cause. Banda, also a Kachere Nduna who was the head artist during the construction of Green Elly was on site during the Elephant Day commemoration randomly calling on passers-by, many of whom were surprisingly enthusiastic.


Nevertheless Green Elly’s frame took a combined team of about eight artists including Sydney Njovu, Martin Phiri, Posie Phiri, Cornelius Banda, Livingstone-based Zig Zag and skilled workers four months to complete. Her frame is so sturdy she can hold up to four adults on her back at a go and she took 22 grown men to load her on and off the truck that carried her from the art studio to the Civic Centre. 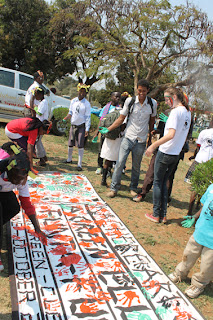 In about a week’s time, the feeding of Green Elly will commence and the likely VIPs to kick start the cause are Minister of Tourism and Arts, Sylvia Masebo and the republican second lady Charlotte Scott.


The Lions Day event that saw the participation of over 150 school going, as well as disadvantaged children was co-organised and funded by GRAD and the Wildlife Conservation Society. The initiative was supported by Olga’s Lodge, the Youth Community Training Centre, Manzi Valley, Big Five Safaris, Bukham’s, Inyatsi, African Impact, Samsung and  Ocean Basket.


Kachere’s Think Green Laboratory, an Alendo Travel and Tours initiative, is also supported in part by the Civil Society Environment Fund supported by governments of Denmark and Finland.


Special thanks also go to Matt Morley of Game Rangers International
Posted by Andrew Mulenga at 05:19