At home with the Yombwes

*This article was first published in the Bulletin & Record Magazine, Zambia in 2012, since then, the Yombwes' Wayi Wayi Art Studio and Gallery has grown from strength to strength. It now runs an international artists residency and has received to Artists-in-residence from the USA so far. The art classes and educational tours are booming and it is a must see art spot when you are in the town of Livingston in Zambia.

The residency at Plot 2613/392 off Airport Road in Livingstone is not your average household. The lady of the house, Agnes often carries a paintbrush in one hand, a cooking stick and ledger book in the other. Husband, Lawrence, a philosophical thinker, reluctant poet and prolific painter often spends long hours dabbling paint on canvases. Daughter, Yande, a school-leaver, designs her own earrings and has a passion for deejaying where as younger brother Kondwani likes fast cars with loud stereos.

Meet the Yombwes. A creative couple who form a husband and wife tag team of artists and their equally creative 17-year-old daughter and 15-year-old son.

Having lived and worked as art teachers in Botswana, they returned to Zambia five years ago and decided to set up house in Livingstone calling their home and business premises the Wayiwayi Art Studio & Gallery.

The Family Business
Although, still enthusiastic, the couple bemoans the seemingly feeble arts and crafts market despite having settled in the country’s tourist capital. Not only do the Yombwes use their home as a studio space to produce their own artistic work. It is also the venue for arts workshops open to schools, colleges and the public, which they say are not happening as frequently as they hoped for.

“In Botswana we used to leave room for disappointment because as foreigners, you cannot do as many things so freely. But when we came back home we were shocked that there were probably more obstacles for us to develop here in Zambia than we faced in a foreign land,” says Agnes  “But instead of being miserable, sometimes I stop painting when we are broke and concentrate on jewellery for a week or so. Then, also the classes and workshops we conduct help put food on the table.”

The couple intends to expand Wayiwayi by building a classroom, storage shed, a pottery kiln and sleeping quarters for local and foreign visiting artists. However, with sluggish business resources remain insufficient. They are reluctant to approach the banks with fear of losing their property against a loan agreement, and attempts to obtain foreign grants usually come with unfeasible terms of disbursement.

“Donors have the opinion that we are not ‘needy’ and so we do not need support. A Dutch organisation visited and told us we have to be a cooperative or group of 10 to be eligible for a grant,” adds Lawrence. In addition, he says although business has been slow, it has been steady.

“Right now there is a school that will be coming for a tie-dye workshop. We have had students from the UNZA School of Education, Mufilira College of Education and Acacia School here in Livingstone. We have a rate sheet for studio tours and the various skills we teach.”

Agnes agrees that while business is slow there is hope for growth despite imitations of African crafts from China flooding the gift shops. She only hopes there could be a way that such goods could be regulated because she creates earrings, necklaces and beadwork to keep the family financially buoyant in between contemporary art exhibitions and commissions. She says projects such as Wayiwayi do have a lot of potential with proper public and private support and she feels it will be around for a long time to come.

“Wayiwayi is here to stay. I do hope it is something that will continue with the kids. At least, Yande helps with the workshops and she even had a division one in art. But I don’t know about Kondwani when you ask him he jokingly says when his time comes I will break down a few walls and turn the studio in to a car show room” she jokes.

A normal day
“I don’t know what my normal day is like.  I wake up early start painting then go to bed after 24hrs. The kitchen is a no go area, unless I’m helping out cooking nshima, because if I’m cooking I can’t move until it’s done, so most of the time she takes care of that” says Lawrence pointing to his wife with a smile “She also handles the paper work and accounts, she does allot, she is practically everywhere; in the kitchen one minute the next she can be in the living room, outside, in the studio or helping with homework”

Slightly bashful after her husband declares her ‘superwoman’, Agnes says like most women she occasionally sits down to enjoy a good soap opera, and the beauty about them is that they are easy to catch up with even after missing a few episodes.

“As a family we also sit together to sing, pray and share bible passages, at least once a week. When we are not too busy we do it every day, “she says revealing the family’s religious side.

“Whoever went to church on Sunday shares the day’s sermon with those who did not. We also have another day where we all review the week,” interrupts Lawrence “I cannot afford to give my children everything but I can afford to find time to at least listen to them, even just for an hour”.

The art
Little did the couple know, that the rich, traditional marriage initiates’ rites of the Mbusa ceremony that they underwent the night before being pronounced husband and wife in 1991, were to change not only their lives, but also their art forever.

Agnes and Lawrence’s artistic styles vary significantly without one openly imitating or influencing the other. And although traditionally they are not supposed to share the secret symbols and hidden meanings of the Mbusa practiced by the Bemba in Northern Zambia, the couple have continuously borrowed from it over the years.

Therefore, the multi-coloured lines, dots, pottery and mixed media that weave a tapestry of secret codes that help mould young men and women into responsible citizens dealing with topics such as gender, respect, hygiene, tolerance and love manifest in the works of  both artists.

Where Agnes is more of a gender and child rights activist in her works with titles such as “Stop Child Defilement” and “Polygamist”, Lawrence often explores political thoughts and social arguments and in his recent solo exhibition, he interrogated homosexuality in his work from the ‘corruption’ series, a topic not too many Zambians are comfortable talking about.

Nevertheless, the couple remain among the most emulated and prolific artists of their generation.

Agnes was born in Mazabuka in 1966, far from her Tumbuka homeland in the Eastern Province. She obtained an Art Teachers Diploma from the Evelyn Hone College where she met Lawrence in 1988. She also has a certificate of art and design from the Wimbledon School of Art in London, attended residencies at the Edward Munch Studio in Norway and the McColl Centre for Visual Art in the USA. Along with her husband, she is a founder member of the Visual Arts Council and served as treasurer and coordinator for women artists’ workshops.

Lawrence was born in Kalulushi, in 1958. He studied for an advanced certificate in Fine Art from Croydon College, joined the Ndola Catholic Diocese as a graphic artist and later attended Evelyn Hone College obtaining an Arts Teachers Diploma in 1990. He attended a short arts administration course the the USA before establishing the documentation centre at the Henry Tayali Gallery, where he also served as VAC vice-president.

As a couple, Agnes and Lawrence take marriage as a very important component of human development, and they believe in sound family values that are bound by tradition, religion and love. They remain an inspiration not only to artists, but also to others in the institution of marriage. - ENDS Follow the Yombwe's on Facebook at: https://www.facebook.com/wayiwayi/ and don't forget to add Andrew Mulenga for updates at: https://www.facebook.com/Andrew-Mulenga-402115859842643/ 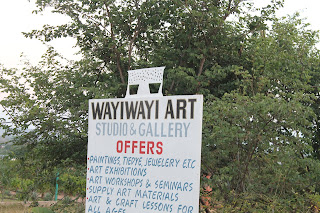