First published by the Zambia Women Writers Association in 1997, Eavesdropping, “A collection of short stories on everyday problems” is no new book; however, edited by Monde Sifuniso this entertaining anthology of 10 moving stories by some of Zambia’s top leisure writers is without doubt an engaging collection of tales by local authors that you will come across. 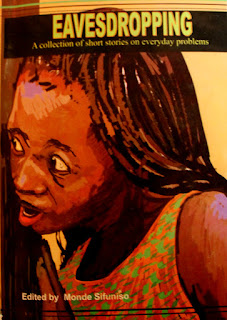 Featured in the book is Samuel Kasankha who was once editor at the University Press and is also the author of over 100 plays and short stories makes a contribution with Good People Live Here a tragic story about a man who loses his wife during childbirth and is left with a surviving infant.

Kasankha has two offerings in the book, his second being Glorious Aparthood which explores the complexities of an interracial love affair between a black Zambian and an Indian girl that ends quite sourly as the girl is later forced into marriage within her own race and religion to “rescue” her from marrying a black African.

Milumbe Haimbe, one of Zambia’s top visual artists puts aside her paint brushes to have a go at creative writing and convincingly tells the story of a 13-year-old girl who manages to resist the temptations of engaging in prostitution and instead holds fast to her trading in groundnuts and maize at a roadside in a story entitled Groundnuts and Maize.

Lungowe Sifuniso Chabala who’s contribution Shattered Dreams is a short, but moving epic that touches on the loss of a loved one is the next story in the book. Her first attempt at leisure writing, one can safely say Chabala pulled it off quite well as it is short to the point and easy to read.

In The Choice of a Name Monde Sifuniso who has also published with Heinemann writes a compelling story of a girl who is sent to jail for killing her own daughter but is later released and, manages to get a university education about a decade later. Sifuniso is also the editor of Eavesdropping, “A collection of short stories on everyday problems”.

Free of Shame is Florence Chunga’s contribution. Her story tells the undulating tale of a failed marriage that ends in heartache yet also observes the bitter-sweet emotional freedom that can follow a divorce in certain instances.

Mulenga Kapwepwe, an accomplished playwright who is also the chairperson of the National Arts Council writes about an old chieftainess called Namfumu Ngoshe who was somewhat of a heroin. The Fury of a Cobra is set in a rural village situation and much of Kapwepwe’s narrative nostalgically harkens back to the witty old tales usually shared around the village campfires often told to children.

Cheela F. K. Chilala also makes a contribution in the book with The Blind Alley, the story of a crooked young man called Mailosi whose dishonesty later catches up with him after he unsuccessfully tries to swindle an elderly couple of their money.

Eavesdropping, “A collection of short stories on everyday problems” is a very entertaining read despite the fact that it does have quite a number of sad stories, it is in a nutshell quite gripping and as the back-cover reads “This collection Eavesdropping brings you stories that will force you to listen”.

The book also has energetic illustrations by artist Thompson Namukaba who also did the cover design.